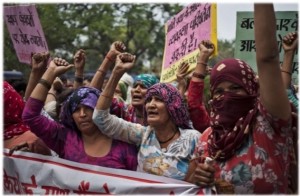 This panel will explore the life experiences of women of the Dalit community in India and the United States.

* Evangeline Anderson-Rajkumar is a Dalit spiritual leader whose struggle and contributions have revolutionized the Church’s approach to religion, gender, caste, and sexuality. She has fought for the human rights of her community across a range of issues, revolutionizing the Dalit Church’s relationship to gender by challenging traditional religious assumptions of women’s bodies as polluting, leaking, bleeding, and sexual.

* Manjula Bharathy is currently a Fulbright Scholar visiting the Department of Women’s and Gender Studies at Rutgers University from the Tata Institute of Social Sciences in Mumbai, India. Bharathy’s research concerns gender and caste, local governance, and micro-credit. Her current work is entitled Engendering Power Spaces for Rights Based Development: Understanding the Local Governance and Gender in the USA and India.

*Yashica Dutt, a member of the Dalit community, is a writer who currently lives in New York City. Yashica has written on a broad range of topics including gender, identity, culture and caste. Her recent book, Coming Out as Dalit, recounts the exhausting burden of living with the secret and how she was terrified of being found out. She talks about the tremendous feeling of empowerment she experienced when she finally stood up for herself and her community and shrugged off the fake upper-caste identity she’d had to construct for herself. As she began to understand the inequities of the caste system, she also had to deal with the crushing guilt of denying her history and the struggles of her grandparents and the many Dalit reformers who fought for equal rights.

* Thenmozhi Soundararajan, a member of the Dalit community, is the Executive Director of Equality Labs, a South Asian organization that uses community research, socially engaged art, and technology to end the oppression of caste apartheid, Islamophobia, white supremacy, and religious intolerance. Soundararajan’s work has been recognized by the Producers Guild of America Diversity Program, The Museum of Contemporary Art, The Annenberg innovation Center, Slamdance, MIT Center for New Media Studies, The Sorbonne, Source Magazine, Utne Reader, The National Center for the Humanities, The National Science Foundation, The Indian Film Festival of Los Angeles, and the Alfred P. Sloan Foundation.

Organized by: Working Group on Dalit and Adivasi Research