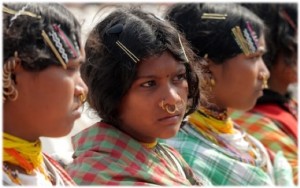 Part II of the two-part panel series on Dalit and Tribal Feminism & Femininity in India, organized by the Working Group on Dalit and Adivasi Research

This panel considers the experiences of tribal women in India, particularly in light of the February 2019 Supreme Court ruling clearing the way for the potential eviction of eight million tribal people from their homes and forests throughout India.

*Manira Alva is currently VP of Political and Civic Engagement of Vital Voices, an organization dedicated to advancing women’s leadership by partnering with activists, innovators, and entrepreneurs of various backgrounds and in local spaces globally. Alva has over 25-years of multi-genre media experience, gendered-policy formulation, and political strategizing focused on feminist issues and improving the lives of marginalized communities in India.

* Manjula Bharathy is currently a Fulbright Scholar visiting the Department of Women’s and Gender Studies at Rutgers University from the Tata Institute of Social Sciences in Mumbai, India. Bharathy’s research concerns gender and caste, local governance, and micro-credit. Her current work is entitled Engendering Power Spaces for Rights Based Development: Understanding the Local Governance and Gender in the USA and India.

*Basuli Deb Basuli Deb is a Global Scholar at the interdisciplinary Institute for Research on Women (IRW) at Rutgers-New Brunswick and a CUNY faculty in English and Women’s and Gender Studies departments. Deb has published a monograph Transnational Feminist Perspectives on Terror in Literature and Culture, multiple sole authored peer reviewed articles, and co-edited a special issue and two anthologies including Building Bridges in Celebrity Studies. She is now completing another monograph project on a transnational feminist rapprochement between indigeneity and immigration called Breaking Borders, Building Bridges, and working on a third monograph project called Come, Cross the Line: Celebrity Lifestyles and Public Intellectualism that deploys feminist media studies to examine cross class celebrity work for social transformation. She has been invited to speak on women and children in the Rohingya genocide at the sixty-third session of the Commission on the Status of Women in March at the UN Headquarters in New York.

*Shashwati Talukdar is an independent filmmaker whose recent films include ‘Please Don’t Beat Me, Sir!‘ (2011), which focuses on the tribal Chhara community’s use of street theater as a form of resistance against police brutality, corruption, and the stigma of criminality in Ahmedabad, Gujarat, India. Her work ranges from documentary, narrative, and experimental, and has shown at venues including the Busan International Film Festival, Margaret Mead Film Festival, Institute of Contemporary Art in Philadelphia and the Whitney Biennial.