Afghanistan at the Edge of Empire


Contact This email address is being protected from spambots. You need JavaScript enabled to view it. 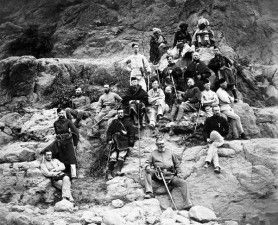 A symposium on Afghanistan's place on the edge of empire, historically and in the present.

James Pickett (University of Pittsburgh), "Northern Afghanistan, Southern Turkestan, or Eastern Khurasan?: Sovereignty and Social Networks at the Edge of the Russian Empire"