A screening of A Thousand Cuts (a film by Ramona Diaz), and a discussion on policing, state violence, media, populism, and authoritarianism.

Location: Film viewing instructions will be sent after you RSVP here (on Eventbrite)

Film Description: With press freedom under threat in the Philippines, A Thousand Cuts goes inside the escalating war between the government and the press. The documentary follows Maria Ressa, a renowned journalist who has become a top target of President Rodrigo Duterte’s crackdown on the news media. Produced, written, and directed by Ramona S. Diaz (IMELDA, MOTHERLAND).

Panel Description: Following an online screening of Ramona Diaz’s film A Thousand Cuts (2020), please join us for a panel featuring Maria Ressa (Rappler), Jinee Lokaneeta (Drew University), Gina Dent (UCSC), moderated by Neferti Tadiar (Barnard College). The film focuses on the current effects of Rodrigo Duterte’s infamous “war on drugs” and the shutting down of independent news outlets as well as the arrest, detention, threats and humiliation of journalists, including Maria Ressa. This post-screening panel focuses on policing, state violence, and how the media and ideological landscapes enable populism and authoritarianism across the Philippines, U.S. and India. The discussion also serves as the staging ground for transnational forms of creativity, solidarity, and resistance. 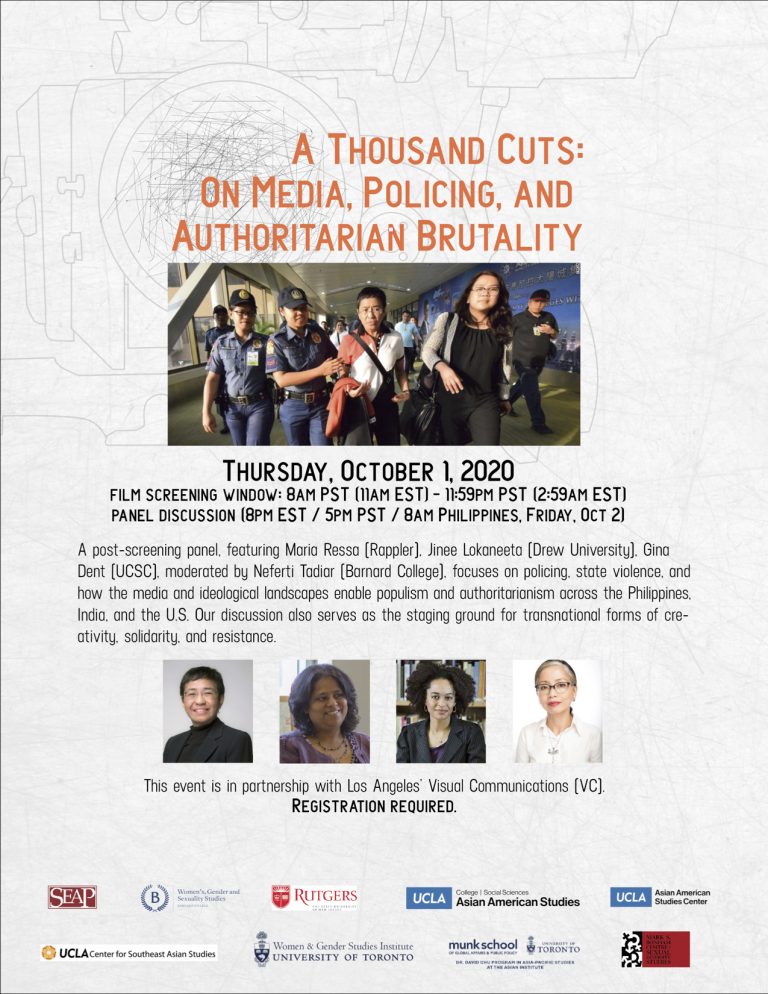 Maria Angelita Ressa is a Filipino-American journalist and author, best known for co-founding Rappler as its chief executive officer. She previously spent nearly two decades working as a lead investigative reporter in Southeast Asia for CNN. An outspoken critic of Philippine President Rodrigo Duterte,Ressa was included in Time’s Person of the Year 2018 as one of a collection of journalists from around the world combating fake news. On June 15, 2020, a court in Manila found her guilty of cyberlibel.

Gina Dent is Associate Professor of Feminist Studies, History of Consciousness, and Legal Studies at University of California, Santa Cruz. She served previously as Director of the Institute for Advanced Feminist Research and as Principal Investigator for the UC Multicampus Research Group on Transnationalizing Justice. She is the editor of Black Popular Culture ([1993] New York: The New Press, 1998) and author of articles on race, feminism, popular culture, and visual art.

Neferti Xina M. Tadiar (moderator) is Professor of Women’s, Gender, and Sexuality Studies at Barnard College, Columbia University. She is the author of two books: Things Fall Away: Philippine Historical Experience and the Makings of Globalization (2009) and Fantasy-Production: Sexual Economies and Other Philippine Consequences for the New World Order (2004).

Visual Communications (VC): VISUAL COMMUNICATIONS’ mission is to develop and support the voices of Asian American & Pacific Islander filmmakers and media artists who empower communities and challenge perspectives. Founded in 1970 with the understanding that media and the arts are powerful forms of storytelling, Visual Communications creates cross cultural connections between peoples and generations. https://vcmedia.org/