ScareCities: The Infrapolitics of Water in Mumbai 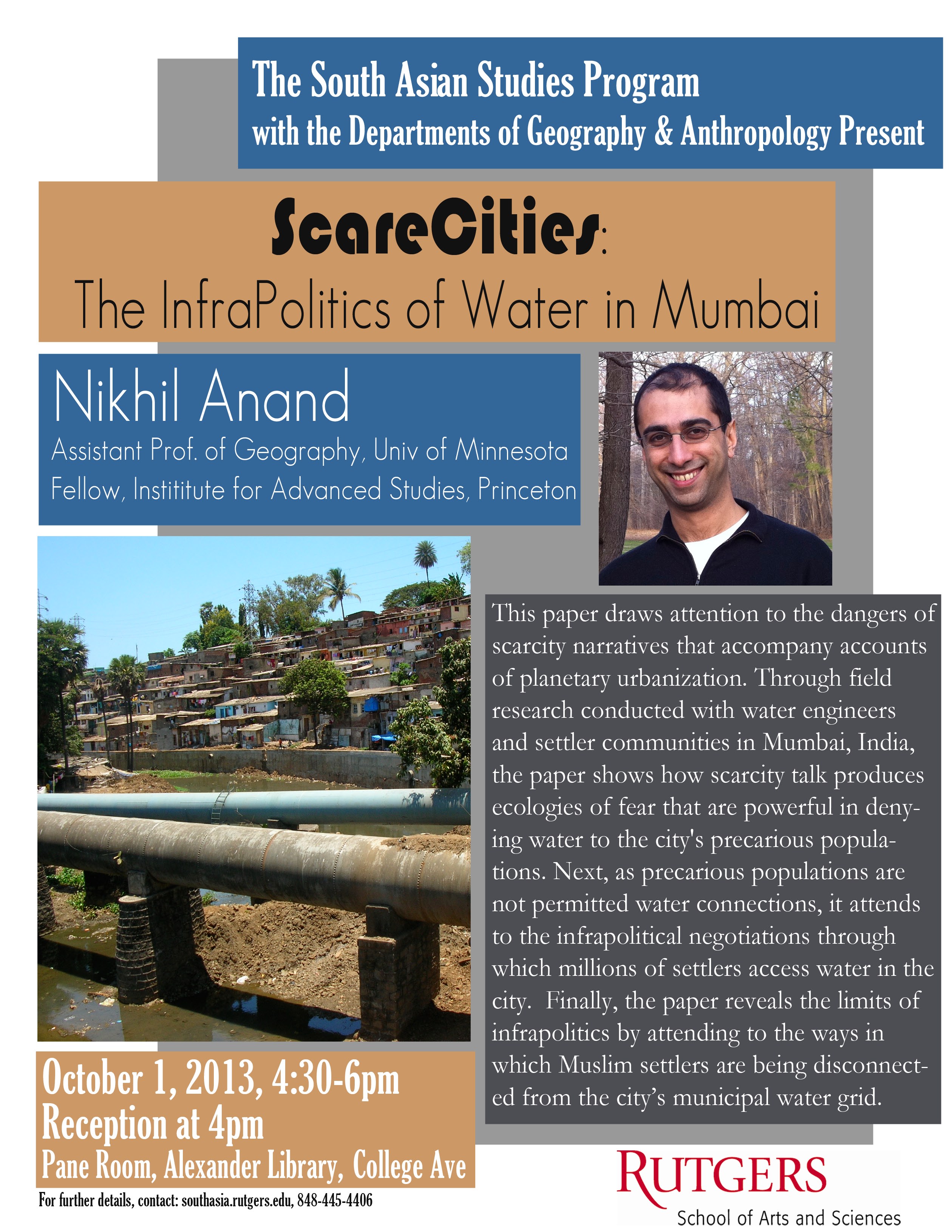 This paper draws attention to the dangers of scarcity narratives that accompany accounts of planetary urbanization. Through field research conducted with water engineers and settler communities in Mumbai, India, the paper shows how scarcity talk produces ecologies of fear that are powerful in denying water to the city's precarious populations. Next, as precarious populations are not permitted water connections, it attends to the infrapolitical negotiations through which millions of settlers access water in the city. Finally, the paper reveals the limits of infrapolitics by attending to the ways in which Muslim settlers are being disconnected from the city’s municipal water grid. 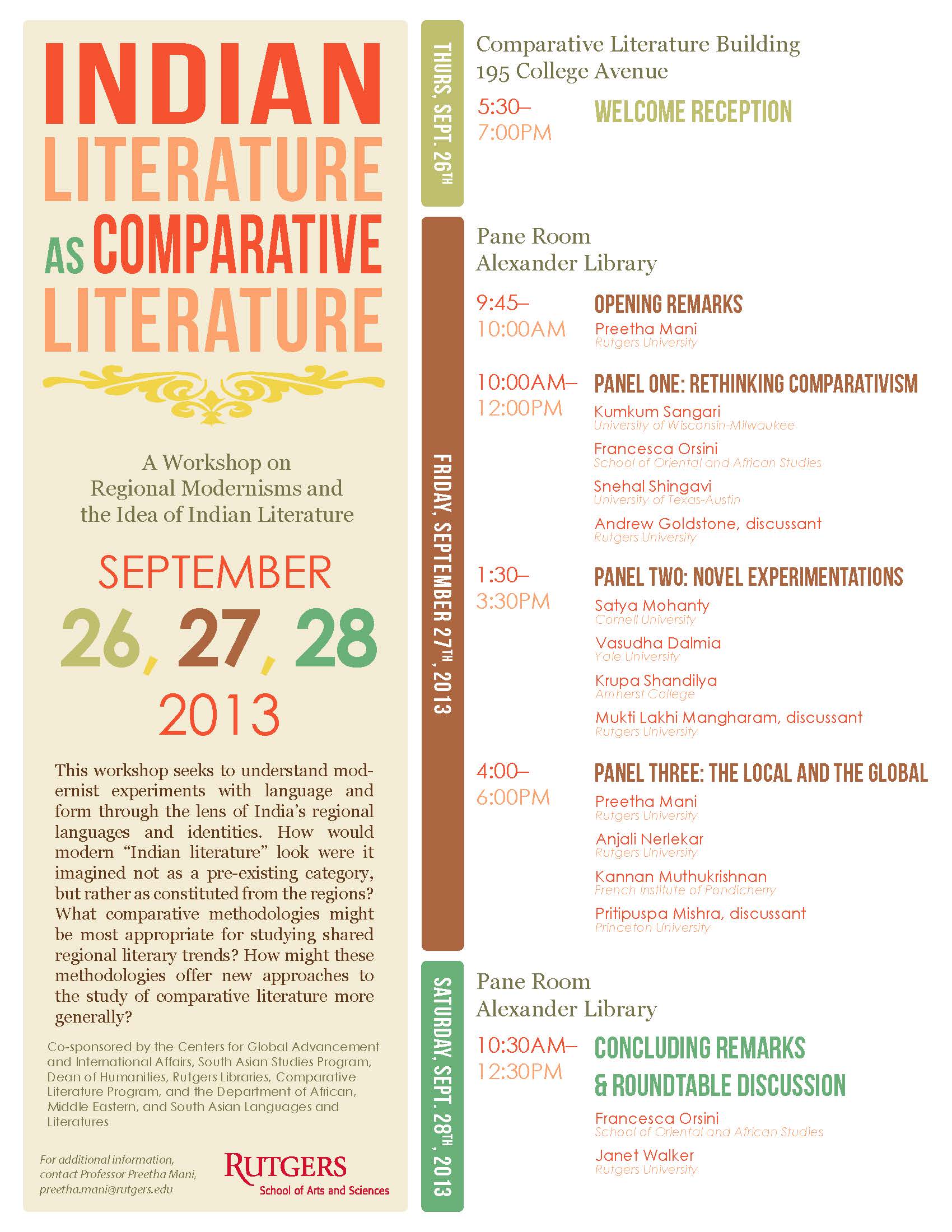 All events are free and open to everyone.

Please join us at Rutgers University, New Brunswick, for "Indian Literature as Comparative Literature," a workshop on regional modernisms and the idea of Indian literature. This workshop seeks to understand modernist experiments with language and form through the lens of India’s regional languages and identities. How would modern “Indian literature” look were it imagined not as a pre-existing category, but rather as constituted from the regions? What comparative methodologies might be most appropriate for studying shared regional literary trends? How might these methodologies offer new approaches to the study of comparative literature more generally?

India's environmental history excites considerable intellectual interest, but country's economic transformation as much as its democratic polity make it imperative to see ecological change in relation to these phenomena.  While interest in the last two centuries is inevitable, a longer view helps clarify and explain pressing contemporary questions on how best to relate to nature in the world's second most populous country.  While it holds no master key to today's dilemmas, a long view will place choices and turning points in better perspective.

Please join us for our spring colloquium series at Rutgers University.  This series explores how gender and nation have been understood and constructed through literature in South Asia.  It does so by bringing experts from English and Comparative Literature, Cultural Studies, and History to Rutgers to engage three key themes: the dynamics of Dalit literature and identity in India, selfhood and identity in post-Independence women's writing, and the role of religious institutions in offering avenues for gender justice and caste equality.  How have changing gender roles  and ideals changed the idea of the nation and who belongs to it?  What role has literature played in precipitating these changes, and how have new tensions over the nation precipitated similar shifts in literary form and style?

Sponsored by the Department of African, Middle Eastern, and South Asian Languages and Literatures, Rutgers South Asian Studies Program, Dean of Humanities, The Office of Undergraduate Education, the Centers for Global Advancement and International Affairs, and Rutgers Libraries.

A Talk by Professor Rajeev Bhargava, Director, Centre for the Study of Developing Societies, Delhi

Abstract:
In light of contemporary challenges states face in managing religious diversity, this talk asks: Do other places and times with experience managing deep diversity hold lessons in how we can all live together? It addresses this question by exploring two such political responses. The first is the great Indian emperor Asoka’s emphasis on the importance of self-restraint for religious co-existence, an idea not to be confused with religious toleration. The second is from over 2000 years later, when a vicious majority-minority syndrome engulfed India. Apart from dividing the subcontinent into two nations, it stalled several freedom & equality-centred reforms. Modern Indian    secularism developed in response to this complex, trouble-ridden situation. Both responses might hold important lessons for our times.

A Bengali Film showing.  Organized by Meheli Sen.  Moinak Biswas will be in attendance and lead the discussion after the showing.  Open to the Public.

Lecture by Ayesha Kidwai of Jawaharial Nehru University in India.

Please join us for this talk, and reception beginning at 4pm.

Karnad’s latest play, Broken Images (which toured the US last semester and which was selected to represent Indian drama at Festival of India in Washington this year ) uses TV screens and digital media on his sets to talk about the fragmentation of modern life. The line between electronic and real-world existence is blurred in this play and it raises questions about the composition of modern life in a way few other contemporary plays do.

Sponsored by AMESALL and SASP in collaboration with Epic Actors Workshop

Co-Sponsored by the Office of the Dean of Humanities, Office of the Director for Undergraduate Affairs, Global Initiatives: Technologies Without Borders, Program for Comparative Literature, Dept. of Theatre (Mason Gross), Rutgers University Libraries

Join us for a public talk by Medha Patkar, renowned Indian social activist, founder member of the Narmada Bachao Andolan (NBA; Save the Narmada Campaign) since 1989, and founder convenor of the National Alliance of People's Movements (NAPM) was awarded the Right Livelihood Award in 1991, and served as a commissioner for the World Commission on Dams between 1998-2001. The NBA’s historic resistance to the Sardar Sarovar and other large and medium dams on the river Narmada in India are well documented and have fundamentally challenged the destructive paradigm of development espoused by big dams and unsustainable industrialization. With her immense dedication and commitment to struggles for justice and equitable and sustainable development, she has inspired generations of Indian activists, leading indigenous peoples', workers’ and peasants’ struggles for rights to land, livelihood and ecologically sustainable development. The event will conclude with a Q&A.

Event is free and open to all. Light refreshments will be served. Please RSVP to Purba: purbarudra@gmail.com, Kasturi: kasturi@cantab.net, or Shambhavi: p.shambhavi@gmail.com

An Immersion with Ranjan Kamath Films:
Fishers of Men, The Die is Caste, and Tanvir Ka Safarnama

The Poetic Nature of the Universe in the
Mahabharata